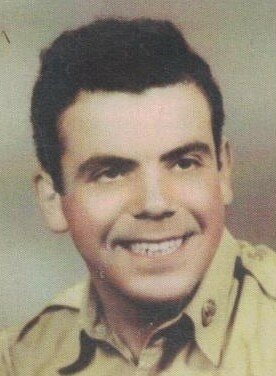 Please share a memory of Richard to include in a keepsake book for family and friends.
View Tribute Book
Richard Scuteri, of Watkins Glen, peacefully went to heaven and into the hands of his Savior, surrounded by his loving family on June 5, 2022 at 2:02pm. He is survived by his loving wife of 69 years, Elizabeth (Bellner) Scuteri; 7 children, Michael (Paula) Scuteri, Victor (Wendy) Scuteri, Frank (Robin) Scuteri, Vincent (Bonnie) Scuteri, Donna Miller, Catherine Herrick, and Gina Brown; sister-in-law, Barbara Neukam; 43 grandchildren; 44 great-grandchildren; 4 great-great-grandchildren; several cousins, nieces, and nephews; and special friend, Robert Mahoney. He was preceded in death by his parents, Frank and Anita (Russo) Scuteri; baby daughter, Sarah Elizabeth; brother, Gino Scuteri; grandson, Paul DeDominick; son-in-laws, Michael Brown, Charles “Harry” Herrick, and John Miller; brother-in-law, Donald Bellner; sister-in-law, Evelyn Bellner; three grandbabies; and six great-grandbabies.   He was born 90 years ago on June 20, 1932 in Bronx, NY where he later attended Samuel Gompers Career and Technical Education High School. He enlisted in the US Air Force in 1952 and served for 20 years until his retirement in 1972, serving in the Vietnam War from 1969-1970. While in the service, he met “the girl he was going to marry”. Richie and Betty were married on August 14, 1953 at Lackland Air Force Base Chapel, San Antonio, Texas.   Starting at the age of five, he spent every summer in Watkins Glen until his enlistment. He loved Watkins Glen so much, he knew from a young age Watkins Glen would later become his home.  When he moved to Watkins Glen after his retirement from the service, he introduced the “cannoli” pastry to the community in 1971 by selling cannoli on the front porch of his home at 409 East 4th St. He became an entrepreneur in 1972 when he opened the 4th Street Italian Specialty store in Watkins Glen, Scuteri’s Pizza “the garage” in 1975, and Scuteri’s Ristorante Italiano in 1978. He retired from the restaurant industry in 1997, although he loved helping his son make dough balls throughout his retirement.   He was a Grand Marshall of the Sports Cars Club of America at the Watkins Glen Race Track and a member of the Vietnam Veterans of America and Watkins Glen VFW Post 2674 until it’s closure. He was elected the mayor of Watkins Glen in 1984. He was a member of the St. Mary’s of the Lake Catholic Church. He had a heart for the unborn and unwavering conviction about the sanctity of life. He went to Washington DC to walk in the March for Life two times, once in a severe snow storm.   He was an avid reader and a history buff. Music lived inside of him. He was a phenomenal drummer, starting at the age of 7 when he got his first drum set. He loved spending time with family, hearing of the accomplishments of his children and grandchildren, and took great pride in his family. He was well known and respected in the local community. He was a very caring, compassionate person. He was a great story teller, able to command anyone's attention, and was a natural born leader. He was a man of strong faith, believing in the power and strength of Jesus Christ's love and the beauty and peace that would await him after his passing.  The family will receive friends and relatives at the St. Mary’s of the Lake Catholic Church, 905 N Decatur St, Watkins Glen, NY on Saturday, June 11, 2022 from 9:00 AM-11:00 AM, followed by a funeral mass at 11:00 AM at the church. Burial at Holy Cross Cemetery. A reception will be announced. In lieu of flowers, donations can be made to the Southern Tier Pregnancy Resource Center, 375 W Water St, Elmira, NY 14905. Memories of Richie may be shared with his family and friends at haugheywoodzinger.com
To plant a beautiful memorial tree in memory of Richard Scuteri, please visit our Tree Store
Saturday
11
June

Look inside to read what others have shared
Family and friends are coming together online to create a special keepsake. Every memory left on the online obituary will be automatically included in this book.
View Tribute Book

Share Your Memory of
Richard
Upload Your Memory View All Memories
Be the first to upload a memory!
Share A Memory
Plant a Tree